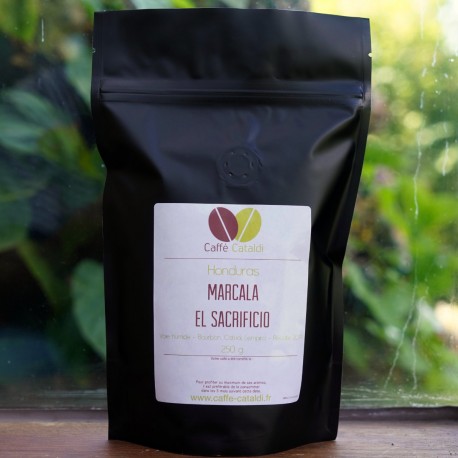 This product is no longer in stock

This coffee comes from the El Sacrificio farm. It is produced at an altitude of 1,450 metres and harvested from December to March. The farm’s altitude, organic production and shade cultivation methods produce coffees of a high quality. It is a coffee farmed with love and passion that is born of considerable sacrifice.
The farm works in partnership with Cafés Organicos Marcala, a private company with a good understanding of the coffee industry and which takes a sustainability-based approach to its cultivation. The cooperative supports producers wishing to introduce state-of-the-art organic farming methods. The cooperative works hand in hand with its farms to promote the switch from conventional farming techniques to an organic agriculture underpinned by strong environmental values. The 700 or so producers who work with the company receive regular training in coffee cupping and organic farming. The cooperative also subsidises the education of local children in order to help future generations.

The El Sacrificio farm extends over two hectares at an altitude of 1,450 metres in the Michigane region in the department of La Paz. It is named after the many sacrifices that producers have had to make to successfully produce quality coffee while introducing sustainable and viable production methods.
The farm became a member of COMSA in 2012, which is when producers began to implement organic farming techniques. They received support and training, which allowed them to develop their business and continue improving the quality of their coffee. In 2013 and 2014, the farm suffered greatly from Roya (coffee leaf rust) and lost 60% of its production. By partnering with COMSA, it was able to rapidly introduce new organic fertilisation and production techniques to produce quality microlots.

Today, the farm produces about 250 bags of coffee on average per year. In addition to coffee, the family also cultivates beans and maize for resale. Their coffee is dried initially on the patio in the sun.

Be the first to write your review !