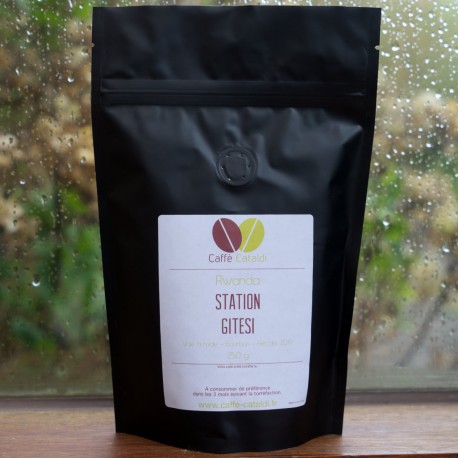 A sweet coffee with a nice growing acidity, a very nice filter coffee

This product is no longer in stock

Gitesi is a private washing station owned and run by a father and son team, Alexis and Aime Gahizi. The washing station was built in 2005 and began processing coffee in 2006, it is located in the Gitesi sector in the Western Province of Rwanda. In the early years they were struggling to keep the washing station operating, and they have fought hard to make it a profitable business. Finally in 2010, they managed to turn a profit and have since built a sustainable company.

Alexis is originally from the Karongi District where Gitesi is located, and his family has been growing coffee in this region for generations. Gitesi has very strong relationships with the farmers in the local community, there are over 1,800 coffee farmers who deliver cherry to Gitesi. The washing station has also implemented a bonus system based on performance, which is paid out to the farmers at the end of the year.
Aime has a degree in engineering and has created a very comprehensive water purification system for the washing station, to such an extent that it is being used to model future water purification systems for washing stations.

Gitesi also has its own land on which it is growing coffee, with plans to expand this. As Aime explained, this is to both directly control and manage the quality of their production, and to ensure supply.

There are more than 1,800 farmers in the local community delivering their cherry to Gitesi washing station for processing. Competition for cherry can be pretty tough, farmers can deliver to whichever washing station they want. Maintaining a good supply of cherry is dependent on the relationships Gitesi has with farmers, and being able to offer competitive pricing. The second payment system that they run here is part of establishing and maintaining cherry supply.

The Washing Station has different programs for the farmers and the local community including:

A sweet coffee with a nice growing acidity, a very nice filter coffee

Be the first to write your review !